Album Artwork Through the Ages: A Celebration of 70 Years of the Album 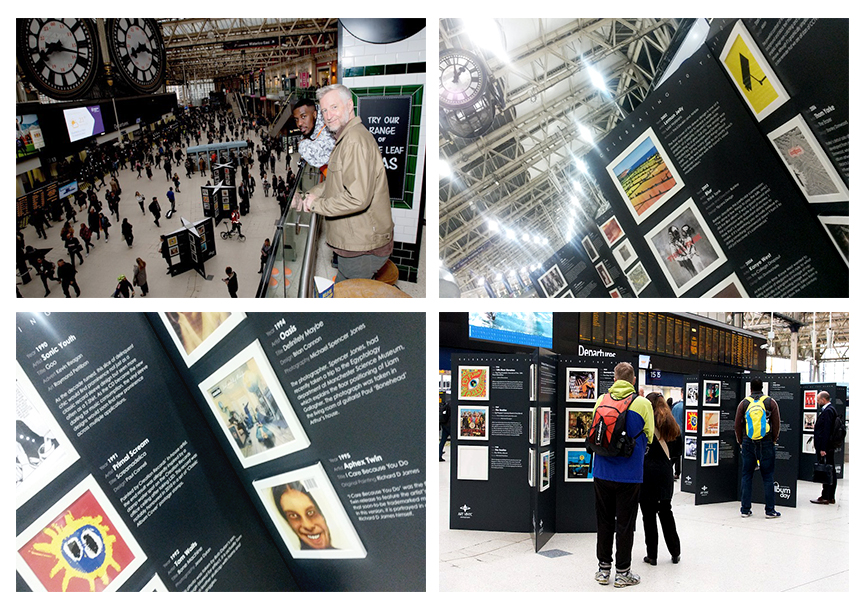 An exhibition commemorating 70 years of iconic album artwork took place in the Autumn of 2018, as part of the UK’s first National Album Day celebrations.
The exhibition launched at London’s Waterloo Station before travelling to Manchester Piccadilly and Glasgow Central Station.
Spanning 7 decades of popular art, music and design, the exhibition marked the cultural milestone of the 70th anniversary of the album format.

An expert panel of judges were enlisted to select the best album artwork to represent each year from 1949 – 2004. These then contributed to the last 13 winners of the Best Art Vinyl Awards which has been running since 2005 and the result, in many ways, is a definitive retrospective of UK popular culture one 12 inch at a time.

The exhibition begins with work from 1949 with a design by Alex Steinweiss who is regarded as the world’s first sleeve designer. In this case, it is for one of the very first LP releases of music by Beethoven. This marks the beginning of a visual journey which pays homage to classic album covers including the likes of Miles Davis ‘Bitches Brew’, Nick Drake ‘Pink Moon’, Grace Jones ‘Night Clubbing’ to more recent artistic designs including The Strokes ‘Is This It’ to Run the Jewels ‘Run the Jewels 3’.

Surprising highlights in the exhibition include The Beatles who are the only music artist to feature twice. One of the Beatles albums to make the list is ‘The White Album”, whose minimalist thought provoking design brings in debate and questions on the importance of sleeve design well into 21st century.

Alison Fielding, Head of Creative at Beggars Group discussed being a judge on the panel: “This is a wonderful project to be involved in and very close to my heart, especially as I was researching some of the beautiful old vinyl sleeves. There was a real craft to them, hand drawn type, vibrant colours, collage (which would have all been hand done) and really out there photography. You can’t even begin to imagine how long these sleeves took to do. It’s interesting to see how sleeves have evolved, but also how many contemporary sleeves borrow from the past and genres are constantly recycled. I love so many of the choices on the list, The Beastie Boys, Elvis, The Miracles, Miles Davis, The Pixies, but for me the standout sleeves on the list are the Freddie Hubbard – Hub-Tones – any Blue note sleeve really does it for me – always has. Joy division – Unknown Pleasures – of course, the sound of my youth and the The Royal Blood cover featuring Dan Hillier’s work is gorgeous – I love his illustrations and bought a series of his prints as a result of seeing this sleeve.”

This Art Vinyl Exhibition has now moved locations and can be seen though out 2019 at the O2 Arena in London, situated in the Designers Outlet retail space.